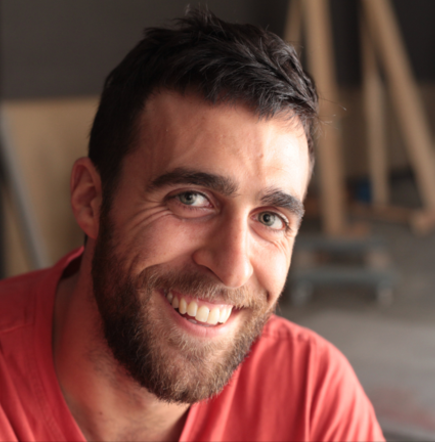 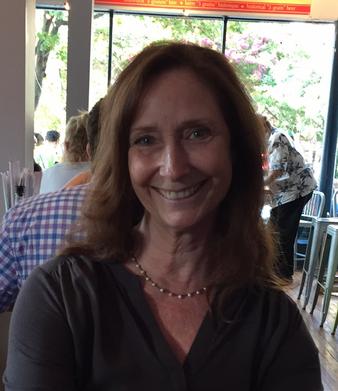 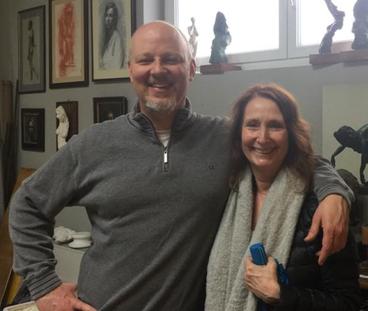 ​Constance Bowden studied figurative sculpture at the Florence Academy of Art under director Robert Bodem, Mitch Shea, Eudald de Juana Gorriz, and Eran Webber, as well as Charlie Mostow and Stephen Perkins in the United States. She began her studies in Florence in the summer workshop of 2015, following 25 years as a portrait painter and bronze figurative sculptor. In addition to her training at the Florence Academy of Art, Ms. Bowden graduated with Highest Honors in Sculpture from the College of William and Mary. She advanced her skills through a three-year apprenticeship in violin making with the Colonial Williamsburg Foundation, followed by five years of bronze casting at the Johnson Atelier Institute of Sculpture Technology, including rubber mold-making, shell, sand casting, wax pouring and chasing, bronze chasing, and patina. She has studied painting with Cedric and Joanette Egeli, Dawn Whitelaw, Paula Frisbee, Raymond Everett Kinstler, Jessica Artman, Angela Cunningham, Cornelia Hernes and Simone Moritz. Her paintings and sculptures are represented in homes and institutions throughout Virginia and beyond. 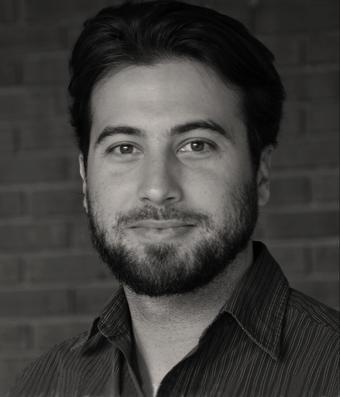 Eudald de Juana Gorriz was born in 1988 to a family of sculptors in a small town close to Girona (Spain), where , surrounded by an artistic and natural environment , he learned the trade and developed a deep interest for art. Studying for a Bachelor of art in Figueres (Girona ) enabled Eudald to focus on learning drawing as a tool to study the world that surrounds us . 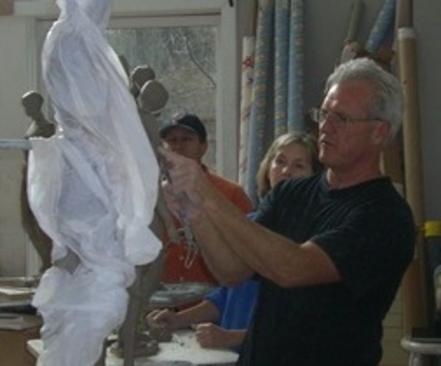 A figurative artist based in Maryland, Rick Casali’s (b. 1984) work expresses his appreciation for nature and his love of the figure. Whether painting one's portrait in oils or sculpting the figure in clay, Casali keeps his artistic principles streamlined: “It is the honest study of nature that leads one to beauty," says Casali. "I'm striving to capture the essence of what is happening…a certain color harmony in the landscape or the spirit of a person in the portrait." His style embraces classicism, Impressionism, and elements of modern design, aiming to fuse the timeless geometry of the Greeks with a fresh Impressionistic vision of reality.

After graduating from St. Mary’s High School in Annapolis in 2002, Rick attended the Maryland Institute College of Art in Baltimore. From 2004 to 2007, he maintained a close apprenticeship with renowned portrait artists Cedric and Joanette Egeli at their farm in Edgewater, Maryland. It was John Ebersberger who introduced Rick to the Egelis, and Rick credits John for opening his eyes to color and developing a command of drawing the portrait and figure. Casali has also studied extensively with sculptor Stephen Perkins, an expert in human construction and anatomy. Additional mentors include colorist George T. Thurmond and portrait artist Michael Shane Neal. 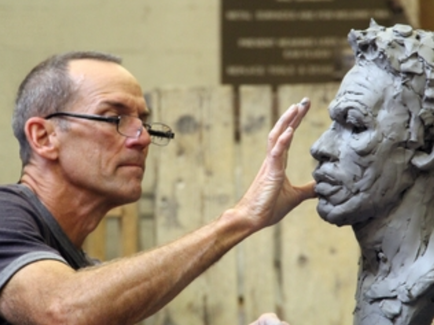 Charlie is a classically trained sculptor who lives and works in New York. He is the Sculptor in Residence at the Grand Central Atelier and is currently accepting commissions.

Charlie is a 2017 Fellow in the Clark Hulings Fund’s Business Accelerator Program.

Charlie has been the recipient of a First Place Scholarship award to the Grand Central Atelier and a Student Scholarship from the Art Renewal Center. He is a member in the Junior Scholarship Group at the Salmagundi Club and a member of the Institute of Classical Art and Architecture. 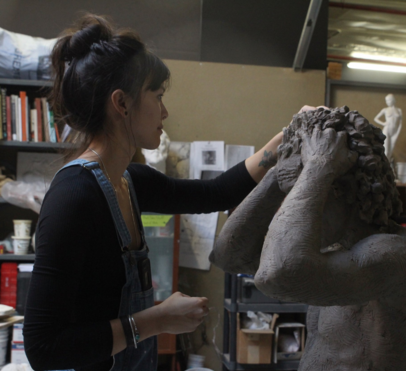 
Thor Larsen, from Copenhagen, Denmark, is a graduate of the Florence Academy of Art and owner of a thriving sculpture studio in Florence where he produces fine works of realistic figurative sculpture and shares his talents through his skillfully taught sculpture workshops.

As an artist, Zoe Duour (b. 1990, Thailand) explores the beauty and design of nature through the study of the human form. She strives to balance the strengths of the left and right brain creating both accurate and emotional work that resonate with humanistic ideals and universal themes.
Ms. Dufour studied at the Grand Central Atelier, the Douglass and Sturgess Casting Company, the Ashland Art Academy, the California College of the Arts Summer Intensive, and also studied with artists Gerald Heffernon and Rita Alverez. She was also the recipient of a Hudson River Fellowship.
Zoe recently won 1stplace in The National Sculpture Society's Portrait Sketch Competition for the second time (2016, 2018), and has also taken top prizes in the Representational Sculpture, American Art Awards (2017) and the Grand Central Atelier Figure Sculpture Competition (2015)

Robert Bodem is the founder of the Florence Academy of Art Sculpture Department and was its director until opening the Athens Atelier in Athens, Greece, in 2018.  Mr. Bodem is the author of Drawing in Space.

Stephen Perkins is a classically trained sculptor, painter and draughtsman. His work is steeped in the timeless art and techniques of the past and the most current and advanced methods of today. With that, the message of the work is geared to today’s life and issues. From evocative figures in sculpture and painting to statements on the experience of life in our time, Stephen’s art attempts to address these topics.
http://www.stephenperkinsart.net/home.html 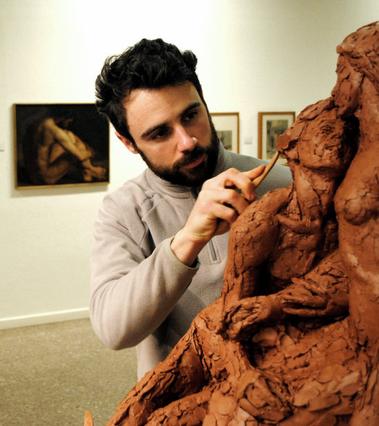 Rick received his formal art training in New York at the National Academy of Design, the New York Academy (now known as the Graduate School for Figurative Art), and the Art Students League.  He studied painting and drawing with a number of notable art instructors, including Robert Beverly Hale (anatomy), Ted Seth Jacobs (painting), Ron Sherr (painting), and Harvey Dinnerstein (painting).  Subsequently he earned his Master of Fine Arts from the University of North Carolina-Greensboro, where he was influenced by the sculptor Billy Lee.

Rick has shown his work in a number of venues nationally, including galleries in Chicago, Washington DC, and New York.  He has received recognition for both his sculpture and painting.  Recent awards have included grants from the Bader Fund (2005), the George Sugarman Foundation (2005) and a fellowship from the Virginia Commission for the Arts (2005).
Rick lives in Charlottesville with his wife Tracy, and their son Max. 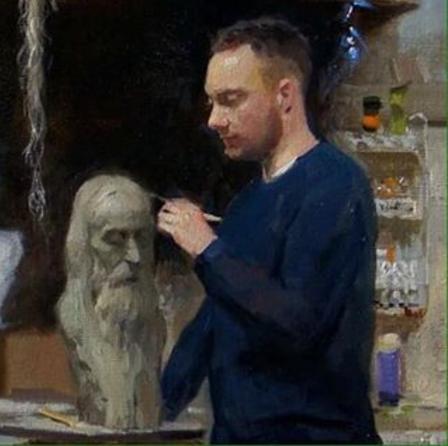